Connecting Community With Biodiversity Through The Common Green

In an age of rapid urbanisation in southeast Queensland it is easy to feel disconnected not only from community but our local environment. Our suburbs are crisscrossed by roads and motorways, and each year we seem to lose more and more trees and green spaces as we see old trees and houses knocked down to make way for apartment blocks.

Volunteer wildlife rescuers are becoming more stressed by the year as the numbers of wildlife that need rescuing in our urban areas increases. For example, in 2019 alone, Currumbin Wildlife Hospital had total admissions of 12,198, compared to 11,082 the previous year. Koala admissions have increased to 600 in 2019 up from 27 in 2008.

With the onslaught of continual development and redevelopment all around us, many of us feel powerless to be able to hold onto community and connection the land. Yet there is a lot we can do to help the beauty and integrity of the environment in our suburbs and preserve our unique and precious wildlife and at the same time build community.

The Urban Green Project aims to do all the above by connecting community with biodiversity through creating ‘common greens’.

We are starting the pilot project in River Downs, an area of Helensvale on the Gold Coast consisting of acreage properties. As a Wildcare volunteer with my wife, over the last few years we have had many call outs for sick and injured koalas here. There is very little significant pockets of bush land left in this, however, there are large mature eucalypt trees on many of the properties.

Bordering the area is where the proposed Coomera Connector, a multi-lane motorway will run past and cut through the suburb of Helensvale. Koalas and other wildlife sadly in many areas have become fringe dwellers pushed into smaller and smaller areas including all along the length of the proposed Coomera Connector. We have released koalas along this corridor in the Helensvale and Arundel sections as we struggle to find suitable habitat for our struggling koalas. 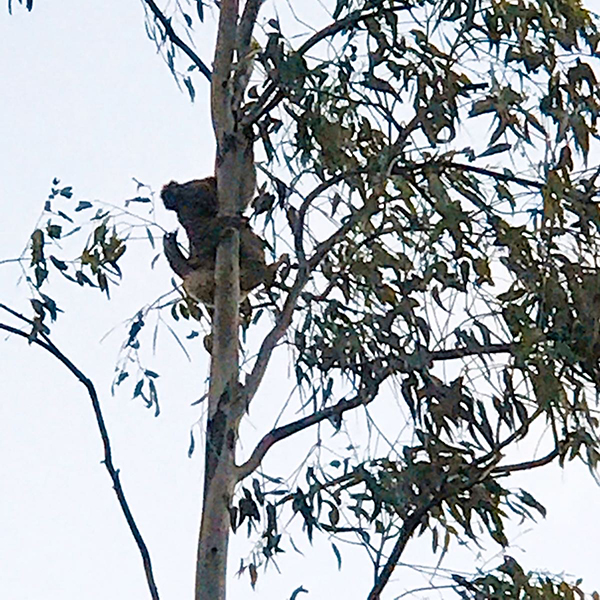 Urban koalas face an uncertain future unless we come together as a community and create a common vision. This is Ted the koala that lives on a nature strip alongside the M1 Motorway at Helensvale.

This is where the power of individuals coming together as a community can make a big difference. Rather than fighting against what seems inevitable it is better to galvanise the community to take action in areas that they can personally can control. As homeowners, the residents of River Downs can make decisions about their properties and this is the beauty of the Koala Connectors pilot project, the first step of a bigger Urban Green vision.

Fighting against something takes our energy, but working together towards a common vision energises and inspires individuals. 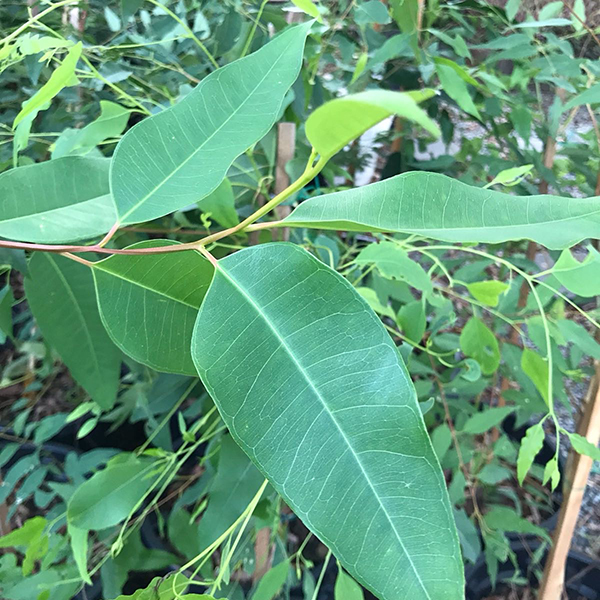 Fresh eucalypt saplings ready for planting for future koala habitat and food. We gain energy and inspiration when we come together as a community with a shared vision.

Koala Connectors is about connecting koalas with community through resident’s actions to create a network of ‘urban greens’ or wildlife corridors at the back of their properties.

Often the area on our back fence is a neglected area. We may have lawn that we cut there but otherwise never venture there. The concept of Koala Connectors is to see this as an under-utilised resource which can be harnessed to create a ‘common’ or ‘green’. I’ll explain what a traditional village common or green is first and the concept will become clearer.

The Village Green or Common

A village green or common is a common open area within a village. Historically they were common grassland with a pond for watering and grazing livestock, often at the edge of a settlement. Later on, planned green were built into the centres of villages. The village green also provided an open-air meeting place for local people. More broadly, the term is used to encompass woodland, moorland and urban parks.

Urban koalas must face many obstacles and dangers traversing the urban matrix. They are vulnerable when on the ground. By providing connected treed corridors koalas can move safely throughout our urban areas. Image supplied by member of the public in River Downs.

In context of our Urban Green project, what we want to create is a series of ‘common’ areas that we share with our precious wildlife along the back fence, or area away from our centres of living, our houses.

By creating a ribbon of green between neighbouring properties we can provide koalas and other wildlife with greater food sources and safe ways to move through the suburb thus avoiding fences and dogs.

These ‘green fingers’ are a way we can join hands with our neighbours to create a shared vision to be good stewards of our properties and carers of our wildlife.

This particular concept of harnessing the power of private landowners has been brewing inside me for a long time, however, the catalyst to finally get this project started came from two recent visits to River Downs. One was to release a female koala. She was brought into a local vet a few days earlier. After being taken in to Currumbin Wildlife Hospital for a full medical and given the all clear we were left with the dilemma of finding suitable habitat nearby. After much deliberation we released her in bush land at the back of the local Council dump.

Little Felicity was one of the catalysts to start the Koala Connector stage of the Urban Green project.

A couple of weeks later we were called out to River Downs after a member of the public called the hotline reporting a mother with a joey in a tree in her backyard. The tiny joey had fallen off the back of the mother koala a couple of times. When we arrived she fell again from a height of ten metres. We don’t believe this killed her however the joey had to later be euthanised as it was very ill.

A few after we broke the news to the resident that Felcity had to be euthanised I called the resident up again. Felicity’s death had weighed heavy on my mind and I asked the resident if I could plant 5 koala food trees at the back of the acreage property. They were renting but a few days later we were given the OK to plant the trees. One was planted in memory of Felicity.

We always like to see the good in any situation and Felicity’s death provided the catalyst for Urban Green. The word ‘felicity’ means “happiness”. It is derived from the Latin felicitas meaning “luck, or good fortune”.  I also believe that in luck isn’t random but that  “we create our own fortune” and so decided to get this project off the ground.

As a community, we could take fate in our own hands to decide the future of koalas in the suburb and thus empower residents with the knowledge that they can’t change the world but maybe be able to be instrumental in changing their small piece of it. 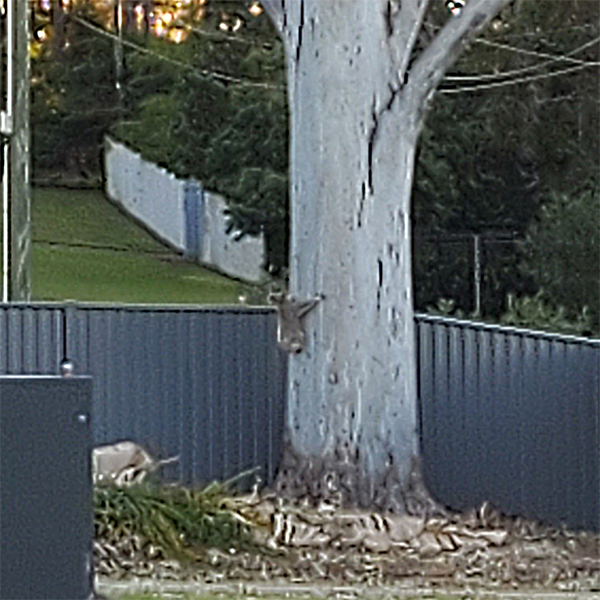 By planting common understanding of the needs and challenges of our urban koalas we can ensure their long term survival. Image supplied by member of the public in River Downs.

The goal of the first stage of the Urban Green project, Koala Connectors, is to engage residents to bring awareness of the unique wildlife in their area, and how they can become responsible stewards by seeing their property in the bigger picture of the area.

Indigenous people have thrived for thousands of years by looking after the land and all its inhabitants. They have a rich culture with stories that bring the environment to life. Indigenous Australians have song lines where they are able to walk the land through stories and singing known as song lines. We have an opportunity with Koala Connectors for wildlife to reconnect strong song lines because of a caring and active community.

It takes a community to look after our wildlife. Koala Connectors is about creating a green network that allow koalas to traverse our urban matrix safely and easily.

Every tree counts. By providing residents the trees and assisting some residents we can create a more connected community. One way we can help connect the community with each other and their wildlife will be to get residents to post their tree planting efforts on our website and post any koala sightings in the area. The project aims to show resident’s that simple actions can be powerful, that they can do something, no matter how small to make a difference.

Koalas On The Green 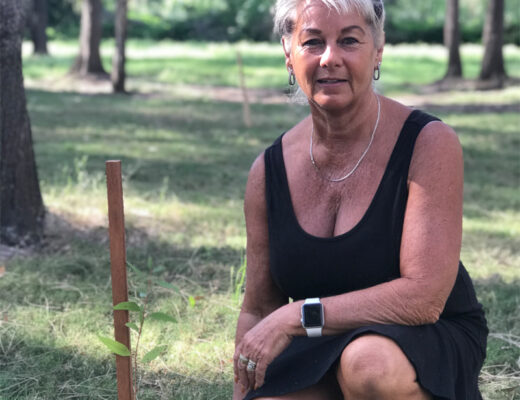 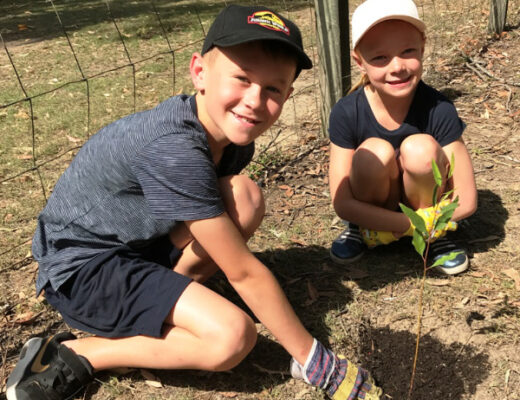 © 2020 Koalas On The Green All Rights Reserved.